Over the past 36 years, entrepreneur Gale Holsman has served thousands of homeowners, businesses, and event planners under the umbrella enterprise known as American Companies. His business continues to thrive, thanks in part to the recent redevelopment of 18 acres on the northeast edge of Martin City he now considers his headquarters. One Good Idea Leads to Another and Another

Gale Holsman is not someone who sits still for very long. He’s always thinking about what’s next, whether that’s an alert on his phone, an appointment on the calendar or an idea that could lead to the birth of a whole new profit center at American Companies.

“I love what I do and I’m always doing it,” says Holsman. “I never wait for things to happen. I make them happen. That’s just how I am.”

36 years ago, Holsman saw an opportunity in parking lot sweeping, bought a $10,000 sweeper, and made it happen.

“I didn’t know anything about sweeping but I had good instincts about how to make money and sweeping just happen to come along.” Sweeping launched the business and continues 35 later for select municipalities and commercial customers.

Using that sweeper wasn’t easy. Every time it filled up, Holsman had to unload it himself with a shovel. He didn’t mind the hard work because he knew it would pay off.

“We take care of all kinds of customers around the region including Arrowhead,” says Holsman. “We’ve been driving the cleanup effort at the stadium for over seven years and we’re really proud of that relationship.” American Companies leads up the cleanup at Arrowhead events.

Holsman also provides a variety of related event support services, an idea sparked by his fiance Gail, owner of Gail’s Harley-Davidson. She’s always been a big supporter of his work through their 16 years together, so when she needed an event stage, Gale built her two.

“Gail hosts parties and fun events at her dealership all the time so I built a portable stage that comes in handy. People see it and keep calling me to book it for other events.”

Holsman is now working on making a third portable stage available to rent. Portable stages triggered the idea for more event support services including portable toilets. Holsman now has nearly 2,000 of them constantly on the move around town at charity runs, festivals, and parades.

“It’s easier to identify the events we don’t service,” says Holsman. “That’s because we service almost every sizable event in the area.” Portable stages are a hot item for events of all kinds. Moving portable toilets into place at Arrowhead for a Guns N’ Roses concert.

“I saw what competitors were charging for some of these services and I knew I could do a better job for less money.” Holsman’s crews are experts at asphalt and concrete maintenance and repair.

A Big Move to Martin City

American Companies has a large footprint in Grandview, but about five years ago, Holsman wanted a change and decided to make Martin City the location for his conpany headquarters. He bought 18 acres just east of Holmes Road on 133rd Street and says he has no intention of ever relocating.

“We run everything out of Martin City. This is our home base. I love it here and I feel like I came at the right time. Martin City is really coming to life and the improvements around the neighborhood are just great. This is the place to be.”

The move to Martin City wasn’t easy because the property needed serious work. It sat empty for over two decades and became a dumping ground for just about anything that could be hauled in. Holsman cleaned it all up himself. He also built infrastructure to reconnect water service to the property.

Then there was the problem with the entrance on 133rd Street off of Holmes. 133rd Street was the only way onto the property but wasn’t of much use because it’s a really short stretch of pavement and the train tracks cut right across it. 133rd Street access to American Companies is a tight squeeze between the train tracks and the property’s gated entrance.

So, Holsman developed a plan for a better entrance. He built a new road that connects the other end of his property to East Blue Ridge Boulevard.

“Between the water hook up and the new road, we had invested well over $120,000 before we even moved in,” says Holsman. “The property was pretty much useless until we came along.” Holsman built his own access road connecting his property to Blue Ridge Boulevard, 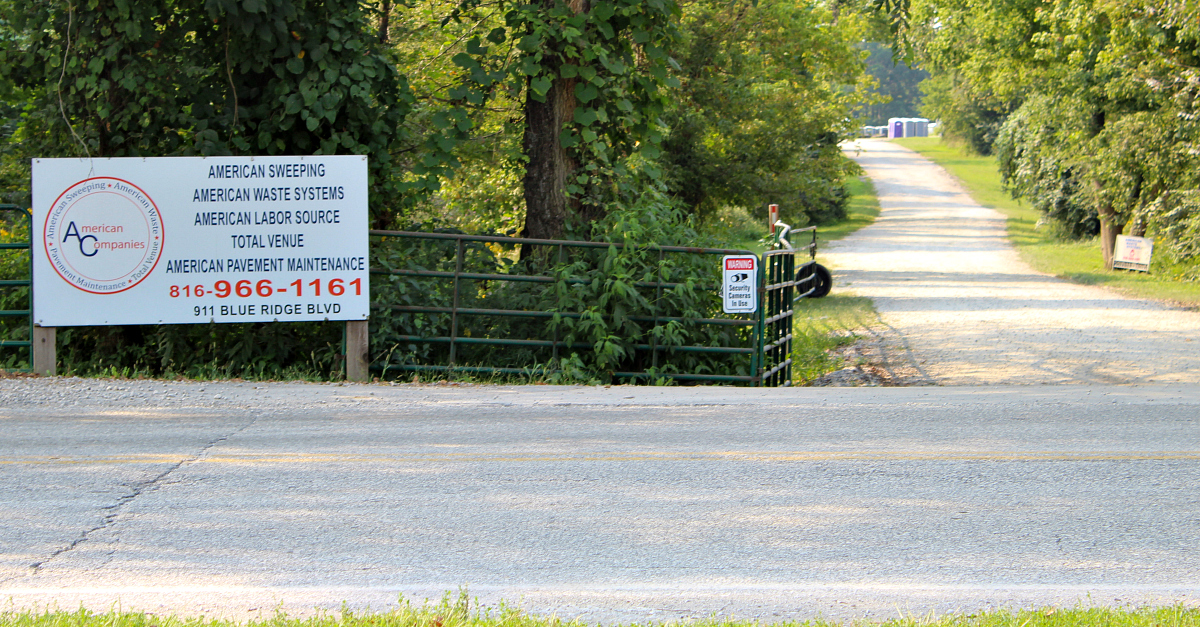 Now the property is clean, level, and dotted with neatly organized disposal containers, portable toilets, waste disposal trucks, and customized maintenance facilities. All of it is connected by gravel paths that vehicles rumble over every day as they enter and exit American Companies headquarters. Portable toilets and roll off dumpsters stored on site. Large container roll-off service for construction and other special purposes

Between the Grandview Road facilities and Martin City, American Companies now employs about 80 people known for their attention to detail and doing whatever it takes to get a pat on the back from customers. There’s a sense of pride among workers involved in everything from cleanup and maintenance to event coordination and onsite service. Holsman believes they all deserve credit.

“I’ve always been big on the ‘we’ foundation of a business. I’m only as good as the people who work for me. I can’t do much at all by myself. My staff is the reason why my business succeeds.” Employees are known for their attention to detail and doing whatever it takes to make customers happy.

You can’t help but notice that Holsman is full of enthusiasm. He says he expects the same from his employees. “I only hire people who enjoy their work. If you’re not enjoying it, then we both suffer and that kind of stuff rubs off on other people and just isn’t good for business.” Holsman says his staff is the reason his business succeeds

When you walk the property and talk to employees, you hear echoes of Holsman’s enthusiasm. There’s a certain camaraderie among workers who are used to pulling together to pull off big events and the timely completion of projects. Holsman says his daughter Shannon is a leader of the company’s culture and a guiding force.

“Shannon runs all event sales and coordination in addition to doing all of our marketing and advertising. She’s just great at all of it and her contribution to American Companies is critical.” Gale’s daughter Shannon Holsman-Lock is in charge of marketing, advertising, and event coordination at American Companies.

American Companies is just part of a career path that’s included 40 businesses along the way. Holsman grew many of them from the ground up and then sold them for profit. Not bad for a guy who started on the back of a trash truck at 17 years old.

He spent the first few years of his career getting the hang of the trash industry on the street before moving into sales where he was a natural. By his early twenties, he was freelancing as a trash disposal salesman for multiple companies, something unheard of in the industry. He then joined the biggest waste disposal company in the country and became one of only a few regional sales managers by the age of 25.

Within a couple of years, he was tired of “being a number” and jumped off to begin his entrepreneur journey. At one point Holsman owned companies in several cities including St. Louis and Atlanta. He sold them all and settled down in Kansas City. Holsman’s experience and high-energy personality have made him the go-to guy for people throughout the industries he serves. In fact, he’s commonly known as the ‘sweeper preacher,’ and shares his personal experience far and wide, logging more than a thousand speaking engagements so far. He’s a founding member of the North American Power Sweeping Association (NAPSA) and he literally helped write the book on sweeping, a simple manual covering all the basics of starting your own sweeping business.

“I just think I’ve learned how to do all of this by figuring it out myself. Anyone who spends any time with me will tell you I like to talk, and when it comes to my work, I can tell you a lot. I also understand processes. I know how to create and fix them. And I know how to focus them to achieve goals.”

Holsman knows a few other things too, which have seasoned his wisdom over the years beyond his work. He’s an expert water skier and an experienced musician. He also collects boats and classic cars and kicks back on his ranch with dozens of horses near Longview Lake. As an experienced guitarist, Holsman is no stranger to the stage and has played with a number of bands.

His son, Jason Holsman, is also known around the area. “Jason is in his second term as a Missouri State Senator. He’s done really well in public service and I’m proud of him. He hasn’t been involved in my business, but he has been known to help me out at Arrowhead after a game. People get a kick out of seeing him with us out there.”

So what has Gale learned from a life that’s been so rich in exploration and rewards? Well, first of all, it’s not about the money.

“I would be miserable if it was just about the money. I do what I love and the money falls in line.”

Holsman strongly believes that no matter how much success and wealth you accumulate, time is always more valuable.

“Time is the most important and the good news is you have control over how you use it. So the question is, how will you use that control? That’s up to you. Choose wisely. And surround yourself with good people. I think that’s made me more successful than anything. I choose to stick with people who ‘get it’ and that keeps me pointed in all the right directions.”

Thank you, Gale Holsman, for bringing American Companies to Martin City. Hard-working entrepreneurs like you shape our community and we are so grateful for your help!